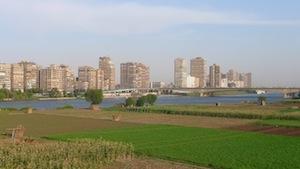 Located alongside the Nile River, the Gazirat al-Dhahab Island, or Gold Island in English, has a population of more than 20,000 people and is highly fertile land used for agriculture. Despite the island’s population, the only means that exists to travel to and from the island is by felucca, a small sailboat that is typically used on the Nile River and Mediterranean Sea. Adequate water and sanitation services are not available on the island, nor are schools or health centres.

Development Plans for the Island

Under Cairo’s intended urban master plan for 2050, the government strives to beautify the city, create new green spaces throughout, and make Cairo more appealing on the world stage. Gazirat al-Dhahab Island is one urban space that the government wishes to put into “better use”. Although this “better use” remains to be clearly defined by the Ministry of Housing and Public Utilities, one option has been to sell the land to a non-Egyptian Arab investor that will use this space to build tourism facilities. 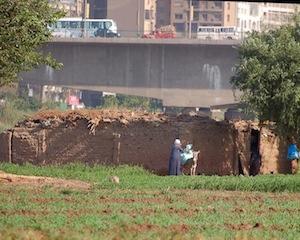 The government’s declaration of the island as a “protected area” and its denial of public service provision on the island has been a way to assert its control over Gazirat al-Dhahab and pressure families to leave. Because of its being a “protected area”, officially, people should not reside on the island, buildings and houses cannot be constructed or repaired, and the government has no obligation to provide water supply and sanitation services.

Families have naturally grown and the expansion of households has become a necessity. Since the government has made it illegal to bring construction materials onto the land, families either experience overcrowding within their households or choose to smuggle materials onto the island. This implies increased costs due to the small amounts of construction material they can bring over; or the confiscation of these materials by city officials and government lawsuits against those citizens who build or repair.

Children also receive inadequate education because there is no formal schooling on the island. The time it takes parents to accompany their children to and from schools on the mainland each day has resulted in many children not attending school and instead remaining at home on the island. Lack of access to a clean water supply and proper sanitation services, in addition to the unavailability of immediate medical care, has led to many preventable deaths, particularly for children who are the most vulnerable.

Opening the Debate on the Right to the City 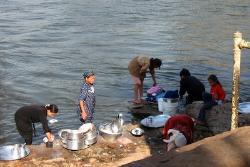 The situation the inhabitants of Gazirat al-Dhahab Island currently face places them in a vulnerable position because of their lack of tenure security and their constant fear of being displaced. The Cairo government is placing its tourist-oriented beautification scheme, and thus private interests, before the best interest of its poorest citizens. The majority of the families living on the Gazirat al-Dhahab Island have been there for more than a hundred years and yet the government still denies their right to remain on the land they have inhabited for so long. Where will 20,000 people go once they are displaced from the island if adequate re-settlement and compensation terms are not provided? The government justifies the eviction of these families by stating that the island is government-owned land which is not currently being used for “public benefit”. It also promises to provide residents with adequate compensation packages. Yet, residents find it difficult to trust the government’s promises since many families who gave up their land in prior negotiations never received full compensation.

The Ministry of Housing and Public Utilities’ lack of clarity on its plans to develop Gazirat al-Dhahab Island has led to the emergence of a diversity of statements on what is to be done. The construction of tourist facilities, the creation of a public park, and even a park with a resort are all ideas that have emerged for the island’s development. One could view the establishment of a public park as a positive use for the island’s land. The Gazirat al-Dhahab Island is a very large piece of land not very densely populated and with Cairo’s growing population and the city’s expansion, a plan for a public park that would enable the island’s current inhabitants to remain and continue cultivating the land could be a possible solution that might satisfy both the government and citizens. The government, however, has been proposing the expansion of green spaces throughout Cairo for a long time now; but planned projects to build public parks always seem to fail as private and foreign investments for large-scale developments are favoured instead. The lack of trust in government promises is one of the central reasons why Gazirat al-Dhahab’s residents have not acceded to the Ministry of Housing and Public Utilities’ demands to leave the island. 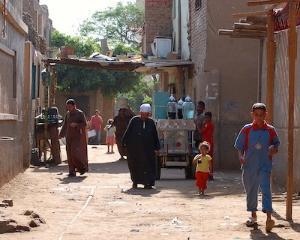 If the government is so eager to increase green space in Cairo, why not allow the people of Gazirat al-Dhahab to remain? They currently practice urban agriculture and produce high quality vegetables and other food products with which they sustain themselves. Cultivation of the island’s land forms part of the people’s identity and livelihood.

This case provides an opportunity to reflect on the concept of the Right to the City. The Right to the City constitutes a process that involves dialogue and debate between urban government’s and citizens. Urban governments must value their citizen’s needs and desires instead of applying different tactics to displace people from their land. As citizens of Cairo, the inhabitants of Gazirat al-Dhahab Island should not be denied access to clean water, sanitation services, a proper education for children, quality healthcare, and adequate housing. The Cairo government needs to listen to its citizen’s demands and give them the opportunity to participate in the planning of their city, especially when both the land they have lived on for more than a century and their futures are at stake.

Eight years after its initial declaration, the Ministry of Housing and Public Utilities has yet to appropriate the land on Gazirat al-Dhahab Island. It therefore still has the opportunity to create an urban plan that takes into account all citizen’s rights, including the poor, to remain within the city and to be involved in the processes that affect their livelihoods.

A Habitat International Coalition (HIC) member, the Egyptian Centre for Housing Rights (ECHR) based in Cairo, has met with government officials to discuss Cairo’s master plan and to emphasize the importance of citizen and civil society participation in urban planning processes. After attending a conference held by the Ministry of Housing and Public Utilities, ECHR felt it was treated antagonistically because of its interference with the plan and believes it has been blacklisted by the government since it is the only NGO brining attention to this issue.

ECHR has also contacted the United Nations Development Programme (UNDP) and the World Bank (WB) since both institutions are involved in the design and execution of the Cairo master plan. During a workshop organized between ECHR and the government, UNDP refused to provide any information on its involvement. The WB however, has been more open to discussion. A workshop on government accountability in urban planning projects to be held in Marrakesh, Morocco, in July 2009 will hopefully provide WB and ECHR representatives an opportunity to discuss Cairo’s urban development plans.

The attitudes and reluctance to collaborate expressed by some of the principal actors involved in the urban master plan for Cairo demonstrates that ECHR‘s work must be supported by local and international NGOs, as well as by the UN Special Rapporteur on Adequate Housing, so that effective strategies can be created to better deal with the planned development projects for Gazirat al-Dhahab Island. This is why in May 2009, HIC members and ECHR representatives visited the Gazirat al-Dhahab community to witness the conditions being faced by the island’s inhabitants and to hear testimonies of their struggles. The 50 housing rights defenders, community leaders, and social movement representatives from 23 different countries were troubled by the impoverished conditions Gazirat al-Dhahab’s residents are living in and shocked to hear what they have been facing as a result of the government’s plans to appropriate the island. An Open Letter to be submitted to President Mubarak has been drafted by HIC to express concern about the urban projects being planned in Cairo and to entice the government to change its destructive policies that have and will continue violating housing and land rights and denying citizens their right to the city.