The relational atlas as a learning and collaborative tool

The relational atlas is used here as part of a multi-actor approach. The aim is to mobilize the living library that is the relational atlas, and its potential in terms of broadening the points of view on a problem to facilitate the entry into intelligibility of all the actors.

Following the example of the approach followed alone by the Internet user, in front of his computer screen, the relational atlas is used to lead this approach in a group, often as a starting point in a territorial project: to apprehend the different possible approaches to the problem, to learn about the experiences already referenced, to build one’s own path for action.

This approach is conducted directly from the relational atlas site by exploring the possible paths based on the group’s issues.

Thus, by showing the sets of relationships, the atlas allows to open the debate on a theme or a given issue, to have a different view on a theme from its usual angle of approach, to have access to feedback that complements its own action.

Using the atlas allows you to identify the points of attention, the possible angles of approach, to identify experiences that can be mobilized, to support an approach. The objective in this case is to represent reality in its complexity, in the diversity of its aspects and to make something out of it, to feed effectively on the experience of others, but above all to get out of a silo approach.

Let us take an example. As part of a project on participatory democracy, local development associations are doing a search in the atlas search engine. Several descriptors emerge from the research. Users choose to start with the simplest: "participatory democracy" in order to get a broad view of this theme. 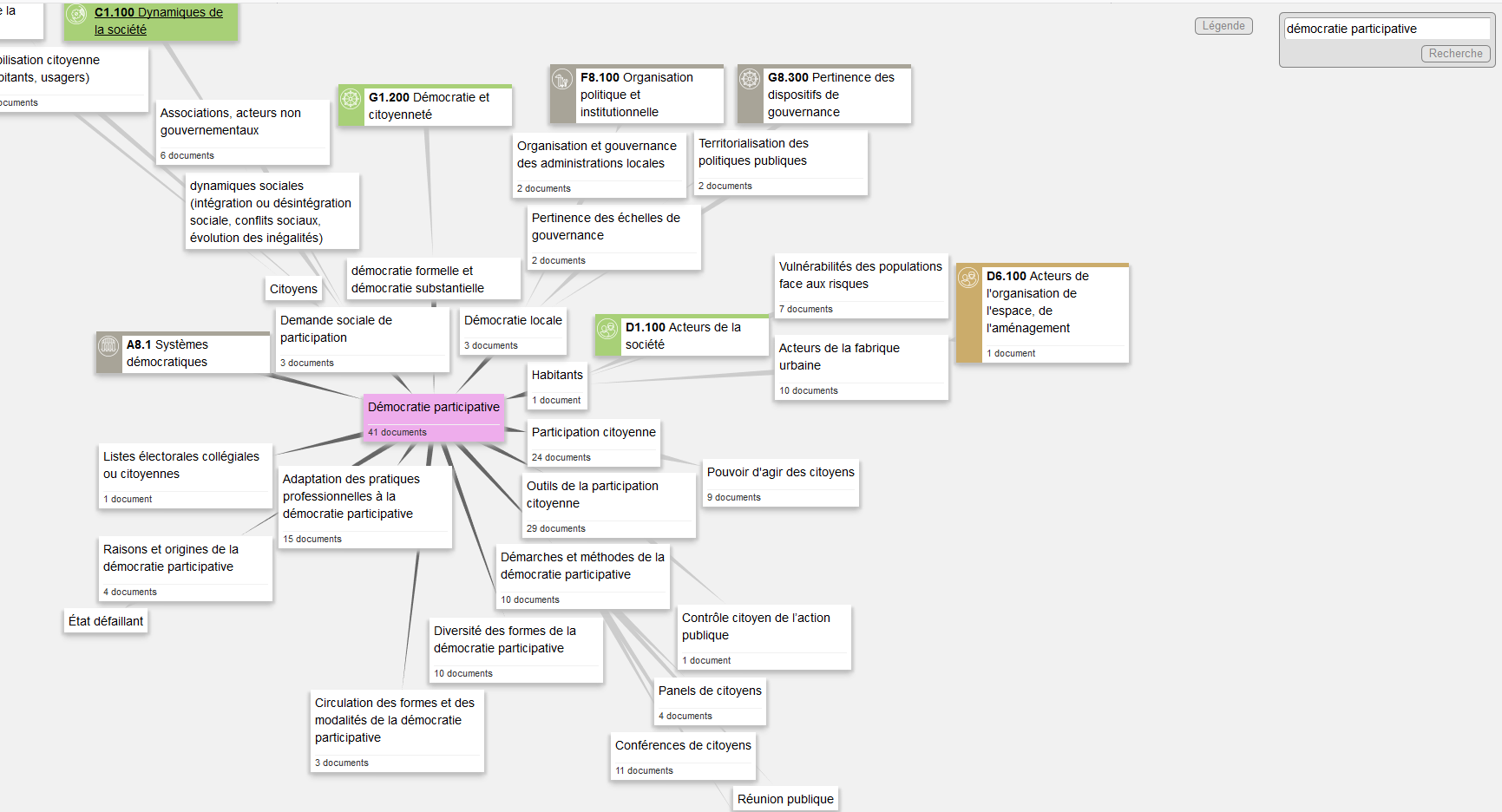 In the context of our example, the level 1 descriptor "democratic system" is of particular interest to users because it describes the operating framework in which the institutions that organize the territory operate. It describes the model that governs the political space in which society operates.

From this constituent descriptor of the atlas matrix, relationships are constructed and new, more precise descriptors are developed. This is the case of "participatory democracy". Element of a democratic system, participatory democracy can be approached by entering the actors concerned (inhabitants, citizens, etc.), the typologies of practices (local, formal and substantial democracy), the dynamics created on the territory (social demand for participation, citizen mobilization), the tools/mobilizable means to bring it to life (development of citizens’ power to act, control of public action, citizens’ panel, citizens’ conferences, etc.).

The atlas thus provides access to resources such as capitalisation of experiences which, unlike conventional aggregations, are confronted/crossed with each other. For example, 41 documents are indexed to date (20/02/2018) with the descriptor "participatory democracy", which corresponds to as many resources that can be mobilized, compared and cross-referenced. The fact of seeing other resources appear on the neighbouring descriptors then makes it possible to widen the crossovers between the resources, to complete them with different approaches.